Steroid anti-inflammatory drugs have a significant anti-inflammatory effect. However, the use of drugs in this group does not exclude the occurrence of adverse reactions. Considering that steroidal anti-inflammatory drugs are "big immunosuppressants", against the background of inhibition of immune cell function there may be a disturbance of epithelialization of skin wounds. This work is dedicated to an exploratory experimental analysis of the regenerative activity of Cyperus rotundus (nut grass) when simulating an infected wound in animals with steroidal hyperglycemia. As a result, the double effect of the studied extract of Cyperus rotundus was registered: decrease of glucose level, increase of granular neutrophils activity, which contributed to activation of regeneration of the infected wound of experimental animals.

Given that there are no universal recommendations for the optimal treatment of infected wounds against the background of steroid hyperglycemia, it is possible to use herbal drugs as an alternative monotherapy together with modern chemically produced drugs. 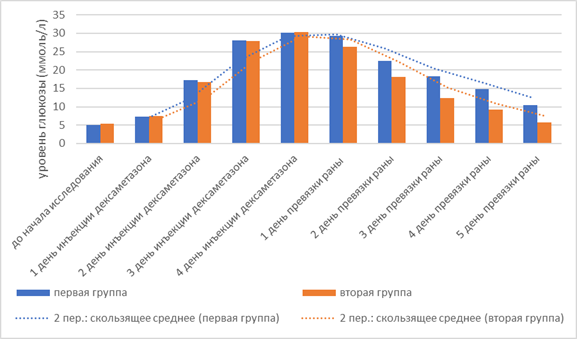