Gender inequality in education system is both a cause and a consequence of deep social and cultural divergence. Polarization is seen among students and teacher staff at schools and/or high educational institutions and in head managerial positions. The article will analyze significant gender differences from various aspects of Turkish and Russian education process and show factors that influence gender displacement.

Almost all countries face gender disparities of some kind, though the challenges vary widely among countries. In general, men frequently have an advantage over women with regard to access to education and they benefit from education more than females in terms of study stage and profile.

The process of motivating women to study and self-development in male-dominated culture began in the beginning of XX century with social and governmental support in both countries and promoted policies and requirements.  Thus, after the changes to mandatory primary education in 1997 and Constitution in 2004 in Turkey Republic, the state was obligated to ensuring the practical right to equality school enrolment rates developed, but the most remarkable change was recorded at the level of higher education. The ratio of females at this level increased from 16% in 1930 to 41% in 2004 [2]. Parallel changes are seen in Russian Republic as well as- modification to education requirements and changing social needs education level of Russian men and women has increased starting from 1994, increase in ratios of women education was observed in all stages that resulted in outnumbering men in education process starting from 2000 [4].

Regarding to above mentioned statistics in Russia women are more than men in high education and it demotivates men to catch up. General reasons why men do not want to study are their compulsory army service, high tuition fees, non-sufficient education quality and/or they think they have enough knowledge and need work and earn money rather than study. However, girls in Turkey outline cultural factors that encounter their education. In majority of families who live in rural areas there is traditional priority of boys over girls and they prefer to educate their boys and marry their daughters instead of educating. Sometimes lack or non-existence of role-models in education centers is also kind of problem for girls there- parents do not want to send their daughters to schools where there is not any women teacher.

Other common effects that drop female presentation in study process are the same as for all- location of educational centers and distance that is a kind of obstacle for secondary school girls in severe weather conditions and/or non-secure long travel, annual school spending such as textbooks, uniforms, transport fee and etc. as reasons in terms of economic factors and, double responsibilities (study and family) such as, child labor or general housework most females do that affects in their study performances accordingly.

Today education in Russian high education system is objected at students in general not specially for boys or girls that limit their opportunities. However, equal positions for both genders at the start do not offer the same professional career after graduation - in an example of high education institutions we can see gender grouping of society as a whole. Thus unequal status of women and men show that currently, women in high education is large group of teachers and researchers. However, this indication of feminization of science and higher education is asymmetric to the ratio of women among professors, academic staff and senior managers of scientific and educational departments. Similar case is observed in Turkey, where the most emphasized outcomes of high education of women is the large number of well-qualified women in professions that are represented with high ratios as university teachers. General attitude in society is that the academic profile, namely teaching profession is good occupational option for women and family support. The proportion of women in education is as high 49%, giving a large share to females in the teaching profession in Turkey. 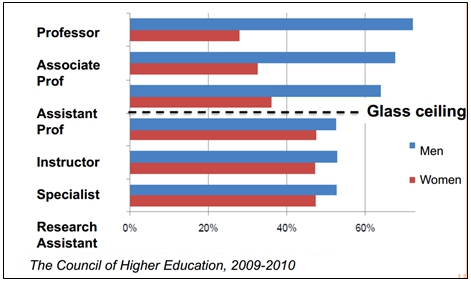 Professional study braches women choose to study in both countries are also the same as in global image. Thus, health, education, economics and law are as popular among females as engineering and transport among men. Although there is not any gender policy in study process, the ratio still is seen in enrollment of students at high professional schools and institutions. The large group of women in Liberal Arts and Social Sciences, Mathematics and Science as in most regions of the world can also be explained by the same employment prospects in teaching. Controversially, other high education fields that men predominate, such as Engineering, Transportation, Electronics, Computer Systems, Technical Sciences and Nuclear Energy has the lowest representation of women.

The similarity was analyzed in employment of women as, women who work in health and social services, education, recreation, culture and sport organizations, and in public administration vary between 70%-80%, while  those who work in finance sphere has low proportion in Russia [3]. Among those doing their residency in medicine in Turkey, the ratio of females is 43% [1, 2]. and 28% of practicing lawyers and judges in the country are women.

Today coeducation and general labor activity changes stereotypes and weakens polarization between men and women globally. Addressing to above mentioned problems and having specific approach to the problem education rate of both genders can reach parity in most study stages as well as professional educational spheres.