RUSSIAN “PYRAMID” AS A TOOL TO EVALUATE SOCIAL INVESTMENTS

RUSSIAN “PYRAMID” AS A TOOL TO EVALUATE SOCIAL INVESTMENTS

The purpose of this research is to analyze the modern trends and today’s development stage of social investments and corporate social responsibility (CSR) in Russia. The core of the corporate interactions are social investments that are formed around the image and reputation of a modern business. It means for the Russian business community the extension of the ranges of tools and responses to calls by the authorities and society, provides a unique opportunity to build partnerships with the equilibrium potential allies. In addition, this study shows the author’s interpretation of the classic Carroll’s “pyramid” applied to Russian realities of socially responsible business. The study was granted by the Ministry of Education and Science of the Russian Federation in the framework of the basic part of the state job of The Yaroslavl State University research project number 1127 “Legal and socio-political aspects of civic engagement in contemporary Russia”.

Over the past few decades the business has done a huge way on awareness of their responsibility for the preservation of the environment, the solution of socio-economic problems, improving the quality of life of local communities, human rights, anti-corruption and other issues, the importance of which is recognized by society. As a result, corporate social responsibility (CSR) is becoming the new business philosophy, according to which the companies are guided in their work not only for profit, but also to achieve the public good and maintaining ecological stability.

One of the most discussed topics in the current discourse of the corporate cooperation with the state and society is the concept of CSR. In our view, the term CSR inherent properties such as relatively open rules of application; CSR becomes a so-called “umbrella” concept or brand, which is a point of reference and synonymous with other concepts of the business community [1, 96]; CSR is a dynamic phenomenon, prone to changes and additions. In light of the growing emphasis on multidimensional aspects of social investments, we analyze the stages and trends of Russian indicators of CSR development process in addition to business-government-society relationships.

Elements of corporate citizenship such as CSR, social partnership, public-private partnerships, social investments reflect the transition from a company’s charity to focused investments at national and regional levels aimed at addressing the most urgent issues for the country in the field of employment, poverty alleviation, education, safety, health and environment [2, 177].

Russian researchers [3, 448] treat corporate citizenship as systematic business interactions with government and non-profit sector in a partnership to a mutually beneficial company’s development strategy and solutions to global problems. In different historical periods in the Russian Federation such an interaction evolved in a unique model that had different objectives and laws. It is the evolution of public-private partnership, business relations with the state and non-government organizations, to the author’s mind, to identify trends and specifics of corporate citizenship and CSR concepts in Russia.

In Russia the level of CSR began to be professional in the last decade. This can be explained by the active promotion of Russian business in the international markets, as well as the desire of companies to make their business more civilized, strengthen the reputation in the eyes of stakeholders, reduce the level of non-financial risks.

In addition, according to the author, it is necessary to pay special attention to one particular trend or pattern, existing in modern business community, as well as imposing certain obligations on the parties of social partnership process. Unlike the classic “pyramid of CSR”, proposed by the American “founding father” of the concept of corporate social responsibility A.B. Carroll in his “Pyramid” article, in Russia we have active components of this “pyramid”, in our opinion, but in different demonstrations. Let's talk about the comparison of data interpretation. As we described above, Carroll made the table of economic and legal components of CSR, and supplemented it with an ethical and philanthropic part [4, 40].

Proceeding from the above components, Carroll offers its practice of social interaction - a model of a “pyramid” (Figure 1), in which the four components of corporate social responsibility are the building blocks, and it is the basis of the economic characteristics of the company. 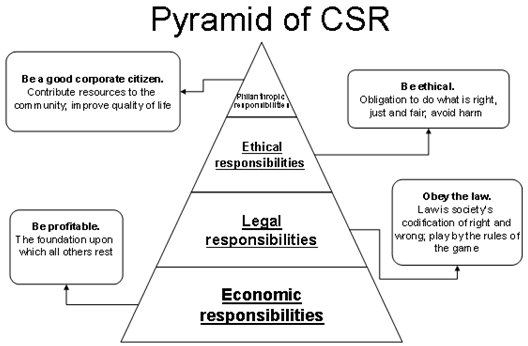 So, with regard to Russian realities of socially responsible business, Carroll’s “pyramid” may acquire other wording and outline (Figure 2). In the first step of becoming a businessman he interested only in business enrichment, profit, prosperity of his family - as a primary requirement, which is quite natural desire of any budding financier. At this stage the lofty goals of social investment is usually illusory, confusing and unnecessary.

In the second stage of business development, the entrepreneur needs to recognize their own contribution to the development of the economy of the city, the region in which he lives. It is important the recognition of his name broadly, a comparison of his name with a decent citizen of his country. At this stage, social investments are non-systematic in nature and are one-off charity or sponsorship in supporting the administration in public events or initiatives.

In the third step a top manager is actively involved in promoting the image of his own company, corporation brand as a responsible taxpayer, partner authorities, which introduces “contribution” to the economy of the macro-region. At this point it becomes important a social partnership of business and government, public-private partnerships when philanthropic management initiatives become systematic in nature, form the foundations and reporting standardization.

In the fourth stage when previous three evolutionary stages have implemented consistently, the business wants to be part of the corporate citizenship, and the top-manager wants to be a real corporate citizen. At the same time the company’s social investments become systematic, planned for the year ahead, standardized according to the international “rules of the game”, and making a profit is not the main tool in the corporation. On the contrary, paramount importance to developing business acquires humanism components: caring about employees, environmental protection, social support for vulnerable groups, support education, work on leveling of social inequalities and other sustainable development global goals. Thus, social investment has achieved through the reputation effect when corporate citizen is not aimed at momentary profit, and expects to receive dividends in the long run. 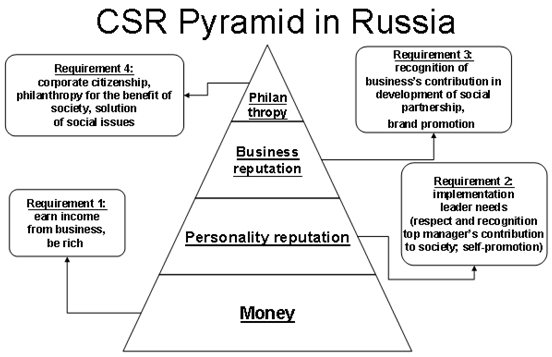 It`s worth to note that in recent years, the political leaders of our country had been increasingly talking about the importance of corporate social responsibility, calling on corporations to cooperate with public authorities in the field of solving social problems and challenges, which indicated an increased interest in the issue at the highest political level, but at the same time it created a risk unacceptably high degree of state regulation of market economy. Forming effective interaction between business and government on issues of social responsibility is gradually becoming one of the directions of the state policy.

In the Message from Russian President Vladimir Putin to the Federal Assembly of the Russian Federation 03.12.2015 [5] it was noted that “the government should hear the people and explain the essence of the problems and the logic of their actions, see in civil society and in the business equal partners”; “We need to further strengthen the trust between government and business, to improve the business climate in the country”. Thus, undergoing institutional changes and system additions of corporate social responsibility concept in Russia gradually moves to a more mature level - the level of corporate citizenship, where the company is a full-fledged “citizen” of society.

So, in the fourth step of business development discussed in this article as an example of social responsible one we can realize that today on the scale of the region or the country as a whole, the business is able to be a social investor, supporting the sphere of science, education, culture, health - those areas that are considered to be social. Social investments in this process are the conductor of a public-private partnership in which there are prerequisites for social and mutual beneficially investment projects.