THE USE OF PRISONER'S DILEMMA IN DIFFERENT SPHERES (NATURAL AND SOCIAL SCIENCES, TV)

This article deals with popular mathematical concept “Prisoners’ dilemma” and its usage in different spheres. The dilemma can be used in the explanation of human instincts, such as self-preservation and social instincts. The topicality of this work is that idea of a theory gives people opportunity to calculate the best solutions in cooperation between two persons.
Keywords:
prisoner, self-preservation instinct, dilemma, betrayal, selfhood, заключенный, дилемма, инстинкт самосохранения, предательство, эгоизм.

THE USE OF PRISONER'S DILEMMA IN DIFFERENT SPHERES (NATURAL AND SOCIAL SCIENCES, TV)

This article deals with popular mathematical concept “Prisoners’ dilemma” and its usage in different spheres. The dilemma can be used in the explanation of human instincts, such as self-preservation and social instincts. The topicality of this work is that idea of a theory gives people opportunity to calculate the best solutions in cooperation between two persons.

Prisoners dilemma-mathematical concept which explains people's habits and actions in dangerous situations. If two people are in trouble, what is the best solution for one of them: to save own life and betray his fellow save both of them by the harder way. By the help of dilemma, it was found that the best way will be act in benefit of both people 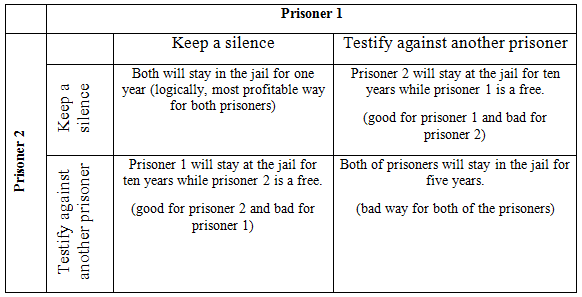 Indeed, originally prisoner’s dilemma is about two prisoners who were arrested and on the possibility to decrease or increase their jail time or imprisonment. Officers offer both of these prisoners to testify against another prisoner, and this testimony can be bad for another prisoner (jail for ten years) and good for him (became free).[2]They don’t have the opportunity to decide their solution, so they can only guess what was said by the second defendant. In table 1, it is clearly seen, that one prisoner has two options: testifying against another or keeping a silence.  Let’s determine the possible results of each option: if prisoner says that another prisoner is guilty: both of them will be jailed for 5 years or another prisoner will stay there for 10 years. If the prisoner prefers to keep a silence: he will be jailed for 10 years, or both of prisoners will be free. As it was said, it is better to keep a silence, because in this case, both of prisoners will be exempted, but if one prisoner won’t testify against another, there is a possibility for him to be imprisoned for 10 years. “Choose the lesser of two evils”-says Russian proverb, so it is better to choose keeping a silence [4, 56].

Biologist uses the concept of prisoner’s dilemma to explain how people use their instinct in conditions when there is no time for reflections. Usually, people in critical situations act according to their biological nature. Actually, it is very interesting that people always act by self-preservation instinct, even if it leads to the worst consequences than other solutions. If there is any possibility to save him, people will use it, whatever it is wrong or right.[1]

The same scheme can be expressed from biological view: in an example of a kennel of lions. In nature, it always happens that two representatives of the same species meet and they can start to fight. There is always someone stronger and someone weaker. Here is a way how it is connected to the dilemma:

From the table it can be seen, that it is better to not go against the strong lion (testify against another prisoner) because it can lead to the worst side. So, as in the dilemma, every lion have 2 opportunities, whether to go to the strong or the weak lion, but eventually, it is better to avoid the strong one.

Another point which will be discussed in this work is the way how people use prisoner’s dilemma on television. For example, on the basis of the game, there is a special TV program, where participants are artificially forced and have to make a decision: helping to another person or delude him.

According to the rules, gamers have to decide will they choose the “split” ball or the “steal” ball, and what to do with a big amount of money. However m there is always the big probability that another gamer will cheat on you and took all the money. So, here a person again faces with the question: “whether to communicate or to deceive?”

In the final analysis, it is obviously seen that the prisoner’s dilemma is a universal idea that found its own place in different spheres. Through the dilemma lots of concepts and situation in the natural sciences can be explored and explained. Broadcasters use the design of dilemma in their spheres. So, if we return to the question, in the beginning, we can be pretty sure that it is better to work in a group because in this case people are satisfying his social need and have the benefit.