This article is devoted to the essence and highlights of territorial benchmarking which are built on the basis of original benchmarking concept, new public management theory and the concept of regional competitiveness.

Benchmarking is a methodology of innovative and creative behavior of contemporary economic units which effectively learn and adopt methods and tools of theoretical and practical content for the purpose of the improvement of units’ characteristics.

According to the international consultancy firm “BAIN&Co” benchmarking is a widespread management technology that occasionally takes one of the first places in “Top 10 Management Tools” list [1].

While globalization compels different countries and regions to compete with each other benchmarking becomes more popular management tool among not only multinational companies but State institutions [2, 10].

Russian researches of territorial benchmarking are only on initial stage of their development. This field of science is considered by Moskovkin V.M., Voronina L.V., Chervyakov S.S., Kaverzin I.L. and etc.

The universality of benchmarking determines it’s suitability in public management and this fact is successfully confirmed with the experience that has been gained in Europe and the US. That’s why many managers of territorial (regional) development are interested in benchmarking. For example, the basis of territorial benchmarking concept in Europe is determined in the Lisbon Strategy which aim is to create the most competitive regional economies in the world. According to “US Navy Best Manufacturing Practices Center of Excellence” half of all organizations in the US, which do benchmarking exercises, relates to government [3].

The analysis of publication has revealed that the territorial benchmarking is based on new public management theory, original benchmarking and the concept of regional competitiveness.

Firstly, benchmarking on company’s level faces the problem of sharing data with competitors, which makes it somewhat difficult for comparisons between companies. But things are different when it comes to comparing locations. The competitive relationship between regional and local territories is much less accentuated than the one that is established between direct competitor companies [4, 5].

Secondly, according to the original concept benchmarking is all about comparing critical business processes, naturally with the intention of improving results. But benchmarking in the public sector is oriented above all towards results or indicators related to performance, and thus serves first and foremost as a comparison of outputs. Having developed this idea Huggins R., Izushi H., Thompson P. and Prokop D. worked out three interconnected types of benchmarking [5, 184]:

The formation of territorial benchmarking as well has become possible thanks to new public management that constitutes a new model of management and implies adaptation successfully used management tools from the sphere of corporate and strategic management. For an instance, there are some good regional practices in using of:

Territorial benchmarking is tightly connected with the regional competitiveness which can be defined as the capacity and capability of regions to achieve economic growth relative to other regions at a similar overall stage of economic development [6, 156]. The regional competitiveness is built on the basis of regional development strategy which usually includes three main parameters: economic, social and environmental factors. All this factors must be used in combination for the strategy- building of sustainable development.

There are still a lot of scientific debates about concrete metrics which must be used in the strategy building. Malecki E. states that it’s very important to use such indicators as the level of human capital, the degree of innovative capacity, and the quality of the local infrastructure [6, 157].

It’s significant to notice that there are some projects in Europe already that allows comparing some cities in different European countries according to the factors that define sustainable development. For example, “ESPON CityBench Webtool”, which was created in 2013 (see fig. 1). 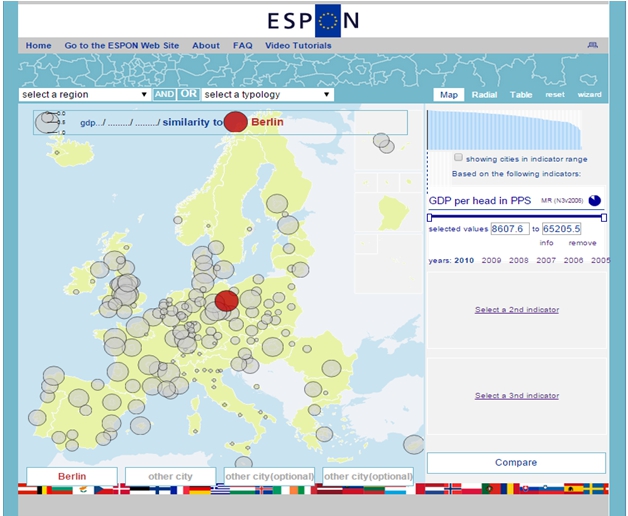 ESPON has developed, in strong cooperation with EIB and EUROSTAT, an innovative and user-friendly tool for a first benchmarking of European cities [7]. It aims at giving a first indication on suitable locations for urban investment, based on various themes like demography, economy, quality of life or investment climate.

Some experts argue that territorial benchmarking is a new management technology and its methodology hasn’t been developed properly yet. But the majority of specialists in regional development is confident that the success of European and American practice in territorial benchmarking exercises will force a lot of countries around the world to use this relatively new management tool.