Today, the methods for the analysis and prediction of financial market behavior are borrowed from neuroeconomics and have become extremely popular. Many economists believe neuroeconomics as an interdisciplinary field in its broadest sense is a neurobiology of decision-making (decision neuroscience) [1]. It combines neuroscience, economics, psychology, and other disciplines to form the basis of new knowledge about mechanisms of decision-making and helps to simulate the behavior of humans and animals.

An analogue of a neuron in the financial market is a fractal - the price of a financial asset.

Usually it is pointed out that “fractal” came from the Latin “fractus” and close to the English word of fraction or fractional. Therefore, from the mathematic point of view, fractal is a plurality with a fractional (fractal) dimension. The fractal dimension characterizes the way how an object or a time series fills space. In addition, it describes the structure of an object when the zoom factor is changing or while zooming the subject. Under zoom factor escalating is meant. For physical (or geometric) fractals, such conversion occurs in space. The fractal dimension of the time series measures how rugged is the time series itself.

Fractal is an attractor (a limit and a goal) for the movement of the chaotic system. Why are these notions identical? In a strange attractor as well as in a fractal while increasing it reveals more details (i.e., it triggers the principle of self-similarity). As much as the size of the attractor is changed it is always in the same proportion. The time series is considered fractal when it exhibits a statistical self-similarity; namely, this property is enjoyed by all ranks of financial assets quotations. The self-similarity could be seen during reading ordinary graphs. For instance, it is impossible to distinguish minute, hourly, and daily charts of any product because they are similar and monotonous. In technical analysis, a typical example of a fractal is “Elliott Waves” which construction is also based on the principle of self-similarity.

An additional idea rooted in fractality regards non-integer dimensions which are usually referred to as a one-dimensional, two-dimensional, or three-dimensional integer world. However, there may be a non-integer dimension such as 2.58 (i.e., located between two-axe and three-axe dimensions). Mandelbrot called such dimensions fractals. [2] This idea originates from the opinion that the three-dimensional measurement of the real sphere or cube is inadequate, as soon as in the real world it could be hardly found a perfect sphere or a cube, without scratches or any other inaccurateness. In order to describe complex objects, other measurements should exist. Such measurement of incorrect fractal shapes introduces the concept of a fractal dimension.

From the point of view of classical Euclidean geometry, a crumpled sheet of paper will be a three-dimensional sphere. However, in reality it is still only a two-dimensional sheet of paper even if it is crumpled. Hence, it can be assumed that the new object will have a dimension greater than two but less than three. It hardly fits the Euclidean geometry, but can be well described by fractal geometry which argues that the new object will be located in the fractal dimension equal approximately to 2.5 (i.e., will have a fractal dimension of about 2.5). The physical meaning of this dimension is very simple in that in the classical three-dimensional space, some parts remain empty because of gaps and holes naturally presented in a crumpled sheet of paper.

The term “market plasticity” encapsulates the dynamic and socially constructed nature of markets better than other available terms. Expressions such as ‘‘dynamics”, “development”, and “evolution” lean more toward the process of market change than the characteristics of markets that allows dynamics. Other constructs such as “change” and “fluidity” neglect what is arguably a critical facet of market dynamics, namely its dual character of both fluidity and stability.

There are two important consequences of the plastic character of markets as defined above. First, the ability to retain form allows markets to give form to other entities by, for example, affecting the shape of a particular exchange object, the mode of a specific economic exchange, or the characteristics of an exchange agent. Second, the ability to take form allows markets to host multiple forms simultaneously.

The main method of the fractal time series study is R/S-analysis or the method of rescaled range. It was suggested by the hydrologist Harold Edwin Hurst (1951) who in the mid-20th century worked at the Nile dam project. [3]

The Hurst exponent can be defined on the interval [0, 1], and is calculated within the following limits:

The Hurst index could be also used as a measure of volatility of the data series. Peters (1994) highlights in his «Fractal Market Analysis: Applying Chaos Theory to Investment and Economics» that in the analysis of stock risks it is preferable to use the fractal dimension instead of the standard deviation. [4] The standard deviation is good while it characterizes variability of random series. If to deal with market as a stochastic process, in this case the use of standard deviation as the main characteristics of risk values is justifiable enough. If to admit that market is not stochastic, but chaotic, fractal dimension as a measure of non-linearity of price movements is much better suited.

Why does an effect of the price inertia in relation to the previous motion appear in the financial markets? This fact can be explained based on the psychology of human memory. The Hurst index of over 0.50 also confirms the presence of non-volatile memory market – the present depends on the past and the future depends on the present.

Those who calculate the Hurst index, based on market prices, often stand the arising question of what ranks to explore – data series or data changes. For instance, it could be the logarithm of the current value to the previous one which is usually used in the analysis of market quotations. Analysis has shown that the normalized logarithmic scale of random series of changes is much smaller than the scale of the normalized logarithmic linear (rising or falling) series changes. As the result, the Hurst index calculated on the logarithms of linear series changes reach huge quantities.

Therefore, if we take a series of data that evince some signs of trending, calculate logarithms changes on it, the Hurst exponent of such series will be well above 1. That is why it will be used the classic model of the Hurst index calculation according to the initial data series. [5]

We have chosen interval of one year and made calculation for the currency pair EUR/USD. The interval is equal to 1 week, the number of observations – 52. The data used for this calculation was retrieved at the FOREX - FXTMPIRE // http://ru.fxempire.com/currencies/eur-usd/tools/historical-data/ . [6]

The results of our calculations are shown in Table 1.

The calculation results show that the market has a memory on a time interval of one year, since H = 0.5469.

Next, we have chosen the different currency pair GBP / USD, the same number of observations (N = 52), the interval - 1 week. The calculation results are presented in Table 2.

The study results also confirm the existence of long-term memory of the financial markets, as Hurst exponent is 0.6684.

Next on the programming language MQL4, the company MetaQuotes Software Corp., indicator has been written on the basis of the Hurst formula. Indicator defines the value of H for each day bar, based on historical data and a predetermined constant period - N and constant -

The study showed that under a large sample (N = 3000) the dynamics of the indicator curve has fairly smooth structure. The minimum value of the Hurst index did not fall below 0.8073 for the EUR / USD and 0.8441 for the pair GBP / USD during the given period. The maximum value of the Hurst exponent for the EUR / USD pair was 0.847, and for the pair GBP / USD is slightly higher - 0.8505. This indicates the presence of long-term memory of the currency markets. 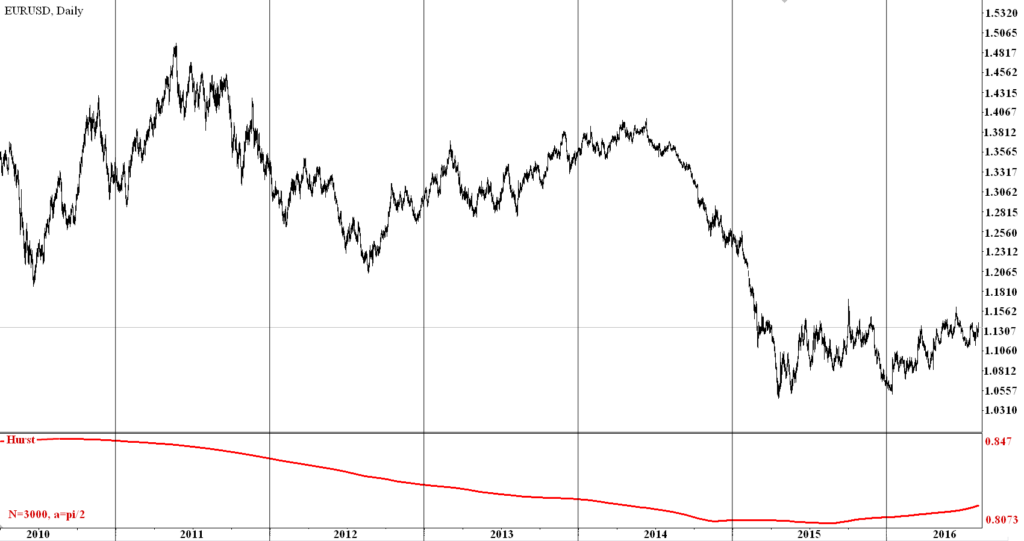 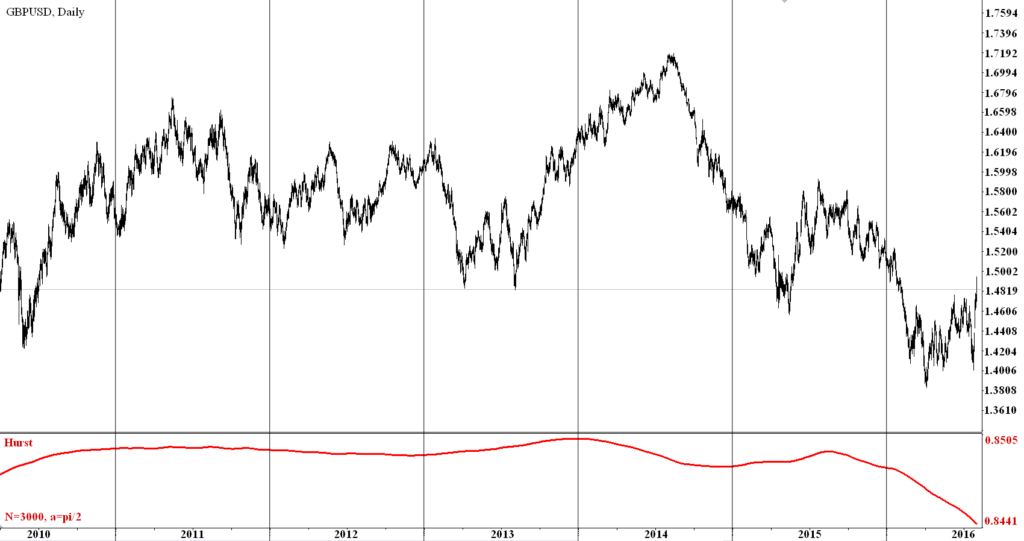 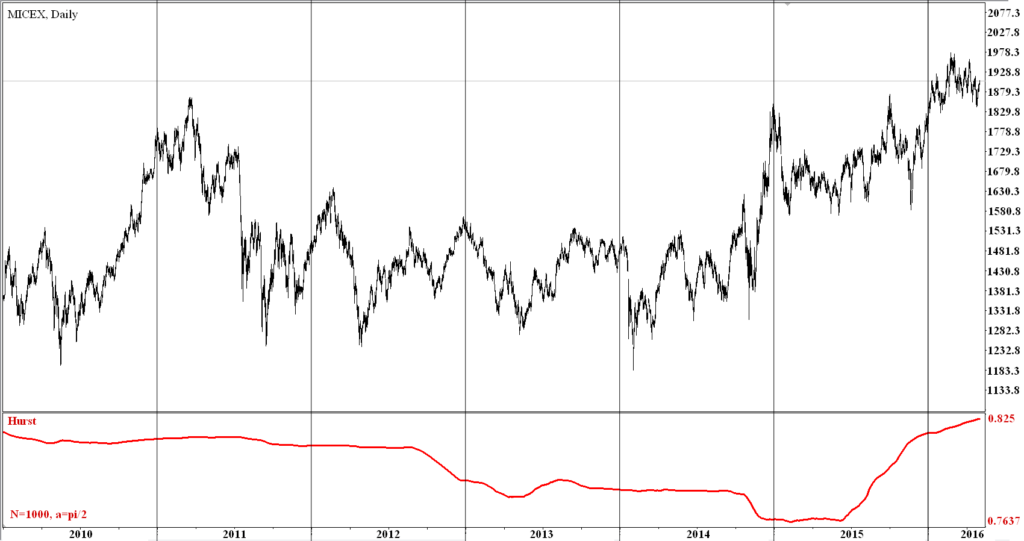 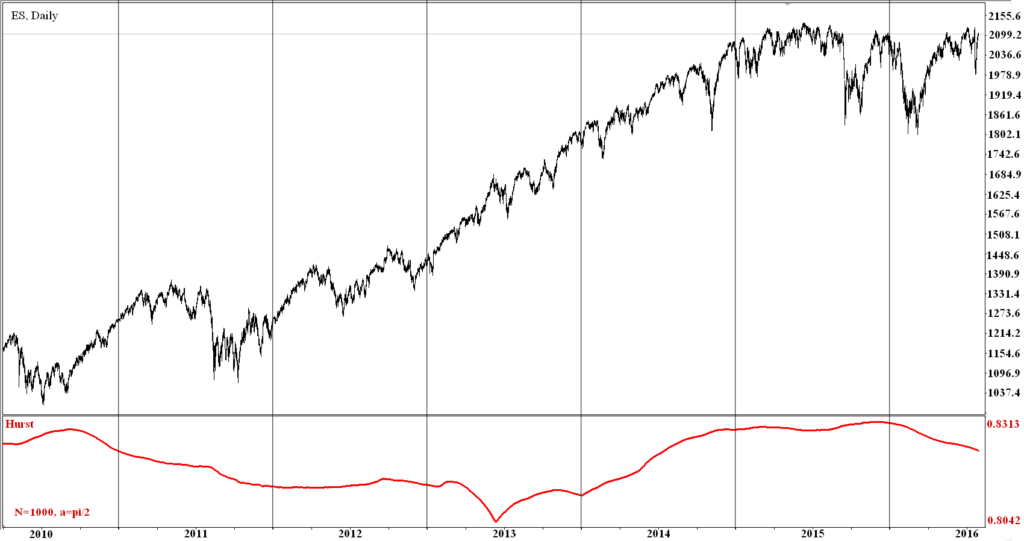 Studies have shown that the values of the Hurst exponent for all indices ranged from 0.83 to 0.76. Russian indices values below for a few hundredths of a unit compared with foreign indices.

Thus, our calculations show that market events and economic indicators are not random. This conclusion was reached for all the calculated data series at different time intervals. The market is inert and has a memory. Moreover, the longer the interval, the more pronounced the market memory. This confirms the validity of the FMH which is seen as an alternative to the EMH. Since the Hurst index can be helpful for calculating fractal dimension, it is considered a necessary element of the FMH.

The results of our calculations demonstrate that market events and economic indicators are not random phenomena. The market has a fractal structure and a long-term memory and plasticity. This conclusion has been reached for all data series in different time intervals. Therefore, the FMH can be applied successfully to economic phenomena. The assumption that investment decisions can be predicted based on the analysis of neural mechanisms of the information influence on fractals will allow to open new horizons in understanding of the investor behavior in financial markets. In order to understand the process of investment decision-making, the following scheme could be recommended: